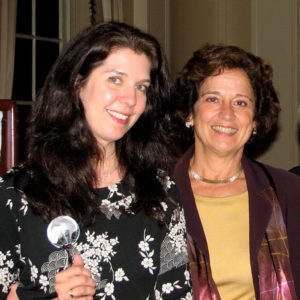 Here I am on the right, with Abby Carter, esteemed author of Alchemy of Loss, a brilliant book depicting Abby’s loss of her husband Aaron Dack in the World Trade Center tragedy on September 11th, 2001 and her many victories in living through her pain, and that of her children.  Somehow Abby adeptly weaves humor into the book such that it is not only readable, everyone I’ve given a copy to describes it as an absolute page turner, often reading it in one sitting, because of it’s power and passion.

Abby received the Woman of Strength award last night at the Yale Club in New York City, from the organization Tuesday’s Children.  I was delighted to attend this ceremony and honor Abby.  (I also bought yet more copies of Abby’s book, which she kindly autographed.)  Her award, which she’s holding really resembled an Oscar, or what I’ve seen on television as such.  It really felt heavy.  I immediately drew an analogy of the heaviness of Abby’s loss, yet she’s put one foot in front of the other, as soon as the afternoon of September 11, and has accomplished so much since 2001, especially in raising her two children in a way that astonishes anyone who knows her.  She was fearful, yes, yet she held her fear in a way that propelled her forward, into the next day, and then the next.  Financially she was fearful at the beginning, yet she listened and learned and now is quite remarkable in her mastery of her money.

She is a marvel, and is a fine example of what women can do in the face of adversity.  Congratulations Abby!

She joins me in my mantra, We Can Do It Women!